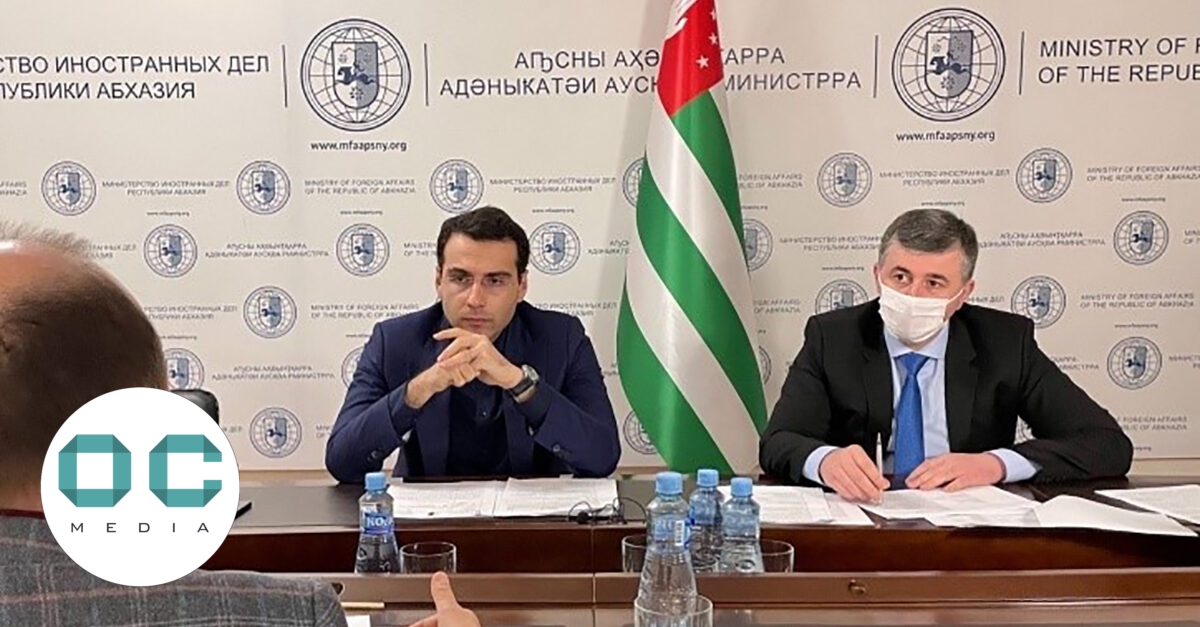 Abkhazia has banned the activities of a joint EU-UN project aimed at fostering dialogue between Abkhazians and Georgians, accusing it of promoting the goals of the Georgian government.

According to Abkhaz Ministry of Foreign Affairs, Foreign Minister Inal Ardzinba took aim at the Confidence-Building Mechanism (COBERM) during a meeting with the head of the United Nations Development Program (UNDP) in Abkhazia on Wednesday.

COBERM is a multi-million dollar program that has been active since 2010; it is funded by the EU and implemented by UNDP.

“The implementation of this project is unacceptable on the territory of Abkhazia. Write it down for yourself and do not implement projects like this again. We forbid you to do this,” Ardzinba reportedly said.

A spokesman for the Abkhaz Foreign Ministry confirmed OC Media that they had banned COBERM.

COBERM did not respond to requests for comment, however, in its statement, the Abkhaz Foreign Ministry said that the UNDP had agreed “to prevent the further implementation of such projects”.

Among the activities supported by COBERM, the program finances gatherings between Georgians and Abkhazians, generally organized outside the region. Its stated aim is to support “initiatives that seek to have an impact on building trust within and between communities divided by conflict”.

According to Wednesday’s statement, Ardzinba said that by “establishing a direct dialogue between Abkhazians and Georgians at the level of experts and youth”, the real objective of the program was to “deceive the citizens of the Republic of Abkhazia”.

Ardzinba also reportedly criticized the UNDP for a recent sociological survey in Abkhazia “which raised questions of a domestic political nature and also explored the possibility of establishing relations with Georgia”. He said that only the authorities were legally authorized to carry out sociological investigations.

Ardzinba reportedly praised other projects of international organizations aimed at economic development and humanitarian aid, and a ministry spokesperson insisted that the ban would not apply to all activities of the UNDP.

“An obsessive request from Moscow”

While news of the ban has been widely welcomed on social media in Abkhazia, for some it risks further isolating Abkhazia from the world.

Inal Khashig, a journalist and political observer from Abkhazia who has been involved in informal dialogue projects, said the decision would come “to the detriment of young people” and restrict non-governmental organizations in Abkhazia.

Khashig said OC Media that was to be expected given the pressure from Moscow.

“For several years there has been an obsessive demand from Moscow to restrict the activities of international non-governmental organizations in Abkhazia according to the Russian model,” Khashig said..

He cited Russia’s “foreign agents” law, which has severely restricted civil society groups in Russia, saying “everything is moving in this direction”.

‘I think in the end this law will pass [in Abkhazia], but it will not be as difficult as in Russia. It is such an action that would show that we meet our ally halfway.

He also spoke about the “Law of Abkhazia on combating international isolation”, which is currently being debated in parliament.

“Despite such a name, it restricts the activities of international organizations in Abkhazia. Due to the existing sanctions against Abkhazia by the international community, which exist at the suggestion of Georgia, this law will further drive Abkhazia into isolation,” Khashig said.

Disclaimer: In 2021, OC Media received funding from COBERM to organize training for aspiring journalists throughout the South Caucasus, including Abkhazia.

For ease of reading, we have chosen not to use qualifiers such as “de facto”, “unrecognized” or “partially recognized” when we speak of institutions or political positions in Abkhazia, Nagorno-Karabakh and Ossetia. from South. This does not imply a position on their status.