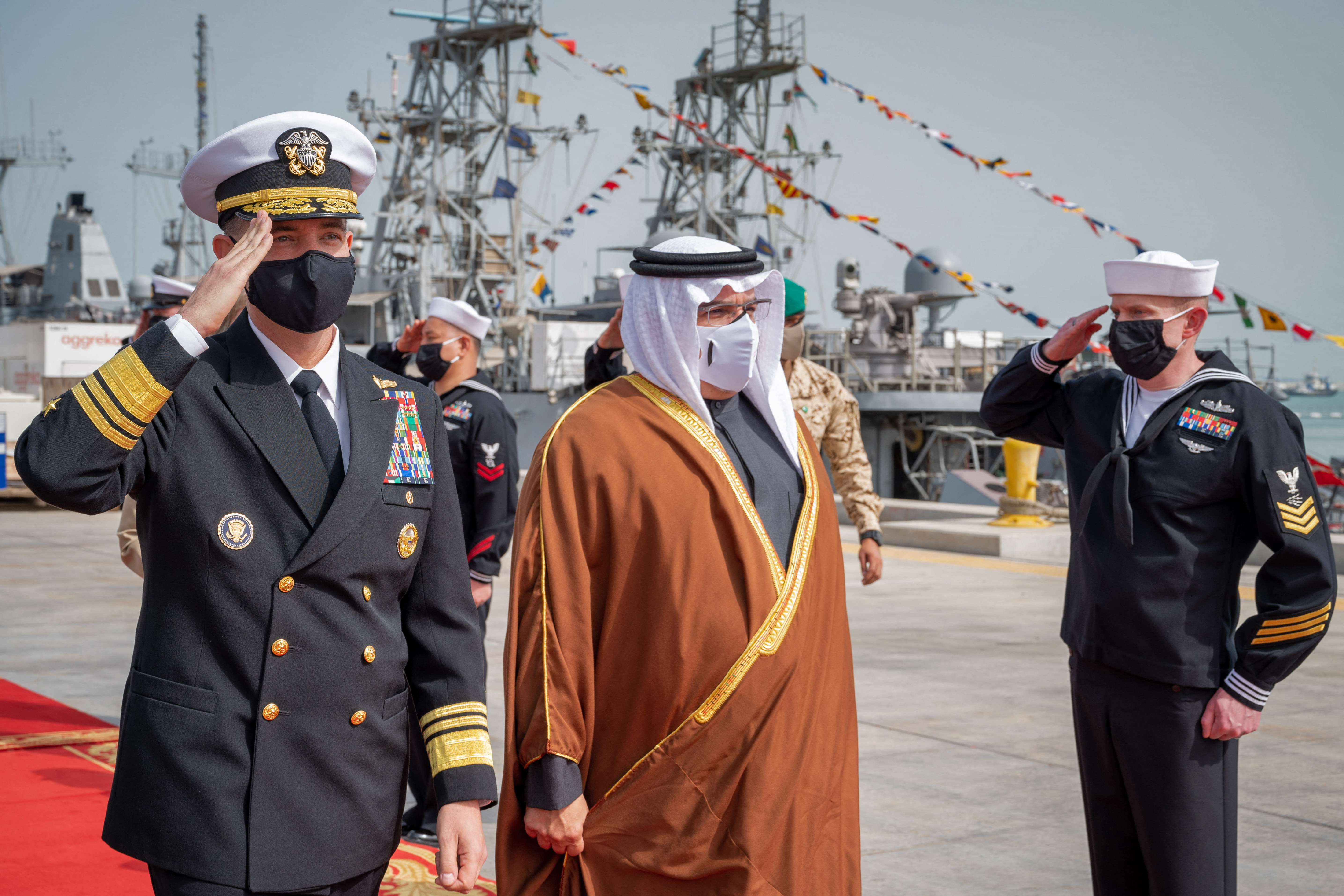 CMF-153: Restoring Trust Between the United States and the GCC through Maritime Security

Efforts to rebuild trust between the United States and Arab Gulf states took a first step with the recent formation of a new naval task force, known as Combined Maritime Forces-153 (CMF-153 ), to improve maritime security in the Red Sea, Bab el-Mandeb and the Gulf of Aden, including the hotspot of Yemen. Created in mid-April, the new task force intends to target arms smuggling for Ansar Allah, as the Houthi militias are officially known, as well as human and drug trafficking. Following the strains in relationships between Washington and Gulf capitals, particularly Riyadh and Abu Dhabi, now is the time for the United States and the Gulf Cooperation Council (GCC) to work together to address the opportunities and challenges presented by the current political landscape. . First, the two-month national truce in Yemen and the appointment of an inclusive Presidential Council embody a de-escalation trend that could help rebuild the Yemen Coast Guard (YCG). Second, the Abraham Accords have created opportunities to enhance maritime security in the Red Sea and the Strait of Bab el-Mandeb, as recently demonstrated unprecedented joint naval exercises between Israel and the Gulf States. Given local security concerns as well as growing rivalries at sea between regional and international players, securing the waterways surrounding the Arabian Peninsula is an urgent need that simply cannot be delayed.

On April 17, 2022, CMF-153, a multinational naval mission temporarily led by the United States and deployed in the Red Sea, Bab el-Mandeb and the Gulf of Aden, was launched “focus on international maritime security and capacity building efforts.” According to Vice Admiral Brad Cooper, commander of the US 5th Fleet, the CMF-153 is intended to target smuggling of weapons, drugs, people and coal – the latter a source of income for the Somalia-based terrorist group al-Shabab – across and around the waterway. Although the Houthis in Yemen were not explicitly mentioned, the weapons in question are largely smuggled to them.

The Houthis: increase in maritime attacks in the Red Sea and smuggling of weapons

From 2021 to early 2022, the Houthis intensified their irregular warfare attacks against civilian targets in Saudi Arabia, the Red Sea, and the United Arab Emirates (UAE). In 2021, the geographical focus of these attacks shifted from the Gulf of Aden to the Red Sea. As pointed out by Final report of the United Nations Panel of Experts on Yemen 2022, the Houthis have increased their use of waterborne improvised explosive devices, including targeting ships moored at maritime oil installations in Saudi Arabia. These devices were presumably assembled in Houthi-controlled areas in Yemen and launched from the ports of Hodeidah and Salif. The attacks were likely carried out with the support of a “mothership”, but nevertheless continued after April 2021, when Israel would have hit the alleged mothership Saviz, an Iranian-flagged cargo carrier in the Red Sea. The Houthis have also used unmanned aerial vehicles to strike commercial vessels and planted sea mines in the southern Red Sea near the ports of Hodeidah, Salif and Ras Isa, as well as drifting sea mines near the Saudi border.

Despite 2015 UN Security Council Resolution imposing an arms embargo against Houthi leaders, traditional boats (dhows) and land transport are still used to smuggle weapons manufactured in Iran, China and Russia into Yemen. According to 2022 UN Special Group Report, “The mix of weapons indicates a common supply pattern, likely from government stockpiles, involving dhows in the Arabian Sea, which transport weapons to Yemen and Somalia.” The report went on to highlight the Houthis’ sourcing of ‘critical components for their weapons systems from companies in Europe and Asia’ through a ‘complex web of intermediaries’ to conceal the chain of custody. .

Yemen: politico-military fragmentation in the rimland weakens the reconstruction of the coast guard

Seven years after the start of the Yemeni civil war, maritime security off the country’s coast remains a major problem. Since 2017, Tareq Saleh’s National Resistance Forces in Mokha and the Bab el-Mandeb region have reduced Houthi influence in the Red Sea, now concentrated in Hodeidah and its smaller ports. However, various armed groups continue to operate in the Yemeni periphery, where they provide security and services to Yemen’s coasts, port cities and islands. These primarily UAE-backed groups, while fighting the Houthis, are also in competition with forces supporting the internationally recognized government. Although military and political fragmentation has certainly hampered the rehabilitation of the Yemeni maritime forces, the YCG has managed since 2020 to increase its patrol activities off the coasts officially controlled by the recognized government.

The recent UN Security Council Resolution 2624 (approved 28 February 2022) not only extends the arms embargo of Houthi leaders to their ranks, but also calls on states to support YCG capacity building efforts. The resolution – strongly backed by the UAE – condemned “the increasing number of incidents off the coast of Yemen” and urged member states “to redouble their efforts to combat the smuggling of arms and components by land and by sea”. For its part, the YCG has already cooperated with the CMF 150 task force to combat smuggling and carried out joint activities with EUNAVFOR-Operation Atalanta (EU Naval Force Somalia) in the Gulf of Aden. At the end of 2020, EUNAVFOR’s mandate was expanded to include the monitoring of arms trafficking.

The Abraham Accords: Catalyst for Maritime Cooperation on the Arabian Peninsula Waterways

In the waterways of the Red Sea, the Abraham Accords are giving rise to new forms of maritime security cooperation that the CMF-153 has the potential to reinforce. This revamped naval cooperation aims to counter Iranian-sponsored irregular warfare activities by preventing attacks on littoral targets. Saudi Arabia also participates in these maritime efforts, although it has not formalized diplomatic relations with Israel. In 2021, the Pentagon moved israel in the US Central Command (CENTCOM) area of ​​responsibility to strengthen Gulf-Israel defense cooperation. In addition, Egypt also has joined the CMF in April 2021, becoming its 34th member. One of the essential facets of this cooperation is the securing of maritime waterways. To this end, the 5th Fleet launched Task Force 59 for maritime deterrence and awareness in shallow waters, with Bahrain as the first regional partner. Later in the year, Israel, the United Arab Emirates and Bahrain held unprecedented naval exercises in the Red Sea, under the coordination of the United States Naval Forces Central Command (NAVCENT). From January 31 to February 17 this year, the Saudi and Omani navies joined the United States International maritime exercise in the Red Sea, alongside Israel, the United Arab Emirates and Bahrain.

Maritime security: a lever to relaunch the US-GCC partnership

Given recent differences between the United States and the GCC, maritime security is a vital mutual interest that can help reinvigorate the partnership. Both sides share the goal of securing global trade routes through the Red Sea, Bab el-Mandeb and the Gulf of Aden. Thus, both sides have everything to gain from a collective security framework covering maritime security, the regularity of energy supplies and the supply of raw materials, in a game of national interests and global security (which I have defined elsewhere as “pan-security”). The containment of destabilizing activities associated with Iran is also a shared priority. For the United States and the Gulf States, the CMF-153 is a win-win. On the one hand, this naval task force largely contributes to reassuring Saudi Arabia and the United Arab Emirates, which have too often felt abandoned by Washington in recent years. On the other hand, the CMF-153 provides the United States with an agile, cooperation-oriented tool to build local capabilities. This has become even more crucial since the beginning of the war in Ukraine, because in the medium and long term, the United States will have to commit to a “flexible logistics network” approach to security in the Middle East. Such an approach involves reducing bases, costs and resources while relying on the security architecture of regional allies. The horizon is “integrated deterrence,” a strategy based not on American primacy but rather on an equal partnership between the United States and its regional allies. It is quite telling that the United States has already announced its intention to hand over the leadership of the CMF-153 to a regional partner at the end of 2022. One can clearly see a multitude of common interests coming together to make maritime security the main focus. ideal start. revitalize the U.S.-GCC partnership, and CMF-153 can be a first step in that direction.

Eleonora Ardemagni is Associate Researcher at the Italian Institute for International Political Studies (ISPI), Teaching Assistant at the Catholic University of Milan and Adjunct Professor at the Graduate School of Economics and International Relations-ASERI. His research analysis focuses on foreign and security policy issues in Yemen and the Gulf monarchies, as well as Arab military forces. The opinions expressed in this article are his own.

Global Demand for Low-VOC Adhesives Expected to Grow at a CAGR of Over 5% by 2030 | Fact.MR Forecast – Queen Anne and Mangolia News