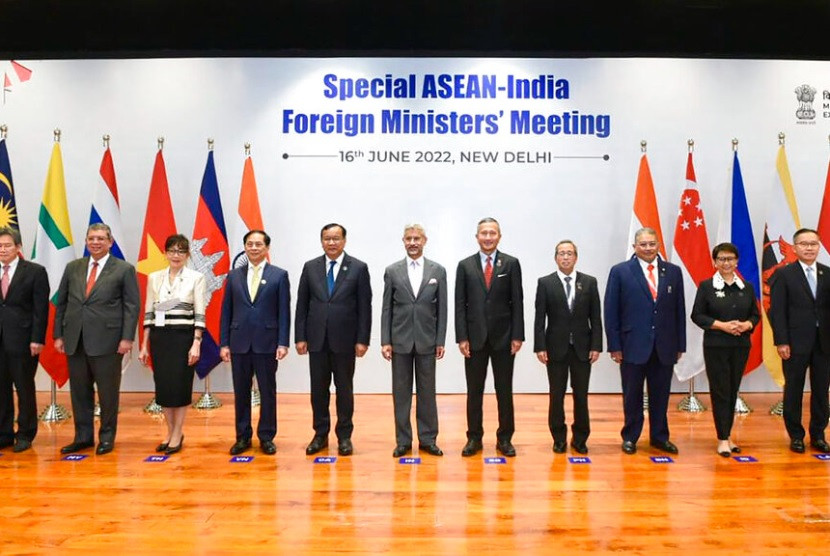 The special India-ASEAN ministerial meeting to commemorate 30 years of dialogue partnership was successfully held. At the June 15-16 meeting, nine of the ten ASEAN countries participated. Myanmar was not invited, in line with ASEAN’s own decision to exclude them, due to their reluctance to implement ASEAN guidelines on their domestic policy.

Thailand, the Philippines and Laos participated at lower levels, but participation was comprehensive and meaningful.

Since India’s last ASEAN Summit in 2021, the problems of COVID-19 and economic recovery have been compounded by the Ukraine crisis. Thus, this meeting was important in trying to address the current global crisis and how India and ASEAN should act together in their own interest to help each other.

The meeting was seen as an important confidence-building mechanism for the region. Cambodia’s foreign minister told the Delhi Dialogue, the side event of Track 1.5, that there was a crisis in the region due to growing great power rivalry, which ASEAN alone does not hadn’t been able to handle.

The Singaporean Foreign Minister underscored India’s important role, especially in tackling the COVID-19 pandemic, economic recovery and confidence-building measures. He said whenever one thinks of the region’s pharmacy or the digital world and the big supplier of agricultural products, all eyes turn to India. Keeping India engaged was important for the region.

The Indonesian Foreign Minister argued that despite the problems and divisions around the world, it was important that strategic trust be built. This meeting was an opportune time for vaccination to deter the diminishing of that confidence.

Indian Minister Subrahmanyam Jaishanker said the partnership had received the double dose of the vaccine, and now the meeting had given him a reminder. This seemed to be the perception among the participating ministers, who showed a degree of comfort and trust with India.

India’s engagement with ASEAN began after India’s economic liberalization in 1991 and the launch of the Look East policy. Subsequently, India became a sectoral partner of ASEAN in 1992. This was enhanced to become a full dialogue partner.

In 2002, India and ASEAN set their annual summits. In 2012. at 20e Commemorative summit, the strategic partnership was established. At 25e anniversary of the commemorative summit held in New Delhi in January 2018, all 10 ASEAN leaders participated, including as chief guests of the

30e anniversary this year is significant. India could once again have chosen a spectacular summit. Considering the problems of the pandemic, the economic recovery and the Ukrainian crisis, it was decided to make a functional ministerial meeting as a special event for the 30e commemoration. Although the United States, Japan and China have held commemorative summits in recent months, India was not rushed into a similar effort and decided to work functionally. This is a welcome move and could perhaps set the trend for India’s other plurilateral engagements which have not taken place for several years due to lack of time and opportunities to hold summits. Holding them at ministerial level could move the agenda forward.

Much of the India-ASEAN agenda is already on the anvil and agreements exist. It is now a question of moving them forward with determination. Most of the ministers underlined in this sense, that we have a good framework and are now moving on to concretization.

Important mentions in the Co-Chair’s statement include a growing weight for strategic and political cooperation. In the past, it was the weakest link in the India-ASEAN relationship, but now it is becoming more focused.

The India-ASEAN joint statement on maritime security at the last summit and the ASEAN Indo-Pacific Outlook Alignment (AOIP) agreement with the Indo-Pacific Oceans Initiative (IPOI) of the ‘India were reiterated as a good frame that requires extra movement. Singapore and Indonesia have offered to participate in IPOI programs.

It has been decided that India and ASEAN will host an informal meeting of defense ministers, to be held alongside the ASEAN Defense Ministers Meeting (ADMM) plus, in November. India’s participation in ADMM plus has become more regular, setting an important tone for the approximately 30 other mechanisms that already exist. The agreement to hold a joint maritime exercise between India and ASEAN as a whole is also a welcome step. So far, India has carried out coordinated patrols with six ASEAN member states.

Economically, there was satisfaction that there was finally a forward movement in India-ASEAN trade which exceeded US$100 billion. This requires much more attention and the creation of new supply chains that will be resilient and not dependent on China. This can be complemented by a review of the long overdue ASEAN-India Trade Agreement (AITIGA).

Despite repeated calls for its rapid implementation, ASEAN’s bureaucratic processes are slow, it now appears that the groundwork to present the proposal to ASEAN economic ministers later this year is complete. The review could actually start after that, and possibly end by 2024.

The enhanced India-ASEAN Free Trade Agreement could be a game-changer in the Indo-Pacific region. Seven ASEAN countries besides India are part of the New Indo-Pacific Economic Framework (IPEF). The Regional Comprehensive Economic Partnership from which India withdrew did not start with enthusiasm. A revitalized AITIGA would compensate for all lost opportunities for engagement with ASEAN without necessarily involving the Chinese factor.

ASEAN must understand this concern with China. They cannot become a conduit for Chinese goods to India. Jaishanker was quite clear in his remarks at the Delhi Dialogue that ASEAN would do well to understand India’s China policy, which was based on respect, sensitivity and mutual interests. He made it clear that what happens at the border will be reflected in bilateral relations with China. In this, India does not follow the model of ASEAN where economic relations are developing rapidly.

The maintenance of the Memorial Ministerial Meeting is that it did not make any grand announcements or new funding mechanism. Region.

The writer is former Indian Ambassador to Indonesia and Timor Leste, ASEAN, Germany, Ethiopia and the African Union.