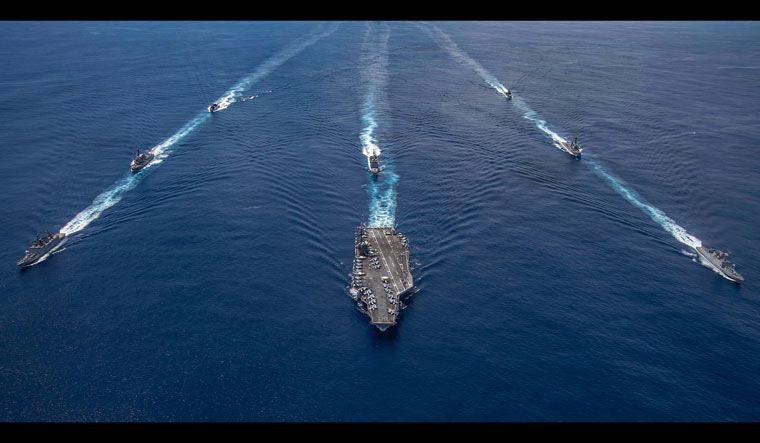 As more than 120 warships from extra-regional forces are currently deployed to the Indian Ocean region (IOR) in support of various missions, a key meeting of the Indian Ocean Naval Symposium working group takes place Thursday to have more effective response mechanisms.

Launched in 2008, the Indian Ocean Naval Symposium (IONS) is a 26-nation voluntary initiative that aims to increase maritime cooperation between navies of riparian states in the Indian Ocean region by providing an open and inclusive forum for the discussion of relevant maritime issues at the regional level. .

This is the fifth meeting of the IONS working group, attended by Australia, Bangladesh, France, Indonesia, Iran, Kenya, Maldives, Oman and Thailand, in addition to the ‘India. Thursday’s meeting is coordinated by the Indian Navy, which chairs the IONS Working Group on Humanitarian Assistance and Disaster Relief (HADR).

“Amid the growing presence of the Chinese military in the Indian Ocean region, the IONS initiative has grown tremendously and currently enjoys wide acceptance throughout the Indian Ocean region,” said said a senior naval officer, adding that in addition to strengthening regional security, the cooperative is a forum for discussion on regional maritime issues, and also serves to develop an effective response mechanism against natural disasters.

â€œOver the past few years, three IONS Working Groups (IWGs) have advanced their work in the areas of Humanitarian Assistance and Disaster Relief (HADR), maritime security and information sharing and interoperability, â€added an officer.

Due to the ongoing COVID-19 pandemic, Thursday’s IWG HADR meeting was scheduled via video conference and would be opened by Vice Admiral Dinesh K. Tripathi, Director General of Naval Operations, Indian Navy. During the meeting, participants would share their experiences, including lessons learned while conducting HADR operations undertaken in the context of the COVID-19 pandemic.

A few days ago, while addressing the Global Security Dialogue Summit on developments in the Indo-Pacific, the Chief of the Defense Staff, General Bipin Rawat, stressed that in recent years, China’s economic and military boom, coupled with competition to increase its influence in the region, has attracted a lot of attention. â€œAt present, there are over 120 warships of extra-regional forces deployed in the Indian Ocean region (IOR) in support of various missions. So far, on the whole, the region has remained peaceful, although contested, â€he said, while adding that we need to build capacity to execute operations in response to requests from friendly foreign countries like HADR, search and rescue, protection of vital communication routes (SLOCS), non-combat evacuation operations and robust protection of our island territories. “