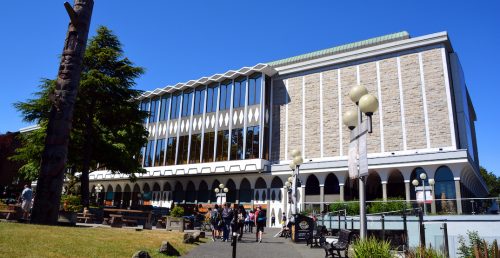 When Alicia Dubois, the new CEO of the Royal BC Museum (RBCM), spoke at the May 13 press conference about the museum’s controversial $789 million redevelopment planned for 2030, it was remarkable and outstanding. that she didn’t mention the words “Nish Synergies Advisory Grouper.”

Since being announced as CEO on Feb. 9, Dubois has maintained a surprisingly full schedule of speaking engagements and public appearances that include promoting her private consulting firm.

Additionally, her online speaker bios for these events often fail to mention her permanent full-time CEO position at Museum Victoria.

The unusual and repeated omission of this critical information raises concerns about the conflict of interest and Dubois’ level of commitment to his new job.

Dubois abruptly quit previous job as CEO of the Alberta Indigenous Opportunities Corporation (AIOC) on November 12, 2021 after only 14 months. According to Corporations Canada records, it incorporated Nish Synergies Advisory Group on November 19, 2021. Dubois is the sole member of the board of directors and the head office address is a residence in Canmore, Alberta. It also registered the domain name nishsynergies.ca on November 14, 2021.

The stated mission of the Nish Synergies Advisory Group is to advise “business leaders, corporations, non-profit organizations and Indigenous governments in their search for how to create synergistic and lasting business partnerships with shared results and measurable impact.

However, the eight-page job description RBCM’s CEO Responsibilities – released July 26, 2021 by Leaders International, which coordinated the CEO search – does not include the flexibility to moonlight as a private consultant.

It doesn’t matter if Dubois is paid for these concerts outside, she invests a lot of time in them.

This comes at a time when RBCM and the BC government are facing a tidal wave of criticism for greenlighting what would be the most expensive museum in Canadian history – without disclose specific details about proposed exhibits, architectural plans, a procurement schedule, or a clear rationale for the 2030 schedule. B.C. Tourism Minister Melanie Mark said the business case would be released this week, but later pushed back the release date to May 25 Instead.

This fits into RBCM’s pattern of highly publicized communications failures over the past two years.

After the very public resignation in 2020 of Lucy Bell, the museum’s head of Indigenous collections and repatriation, Jack Lohman, then CEO, resigned in February 2021, and RBCM apologized for internal racism in June 2021. The museum then suddenly announced on November 3, 2021 that it would be closing its popular third-floor main galleries – including the beloved Old Town, Becoming BC and the First Peoples Gallery – in service of modernization and decolonization.

A massive public backlash ensued as RBCM worked to explain exactly how the Old Town, in particular, was guilty of “offensive stories” with its vintage forge, its hotel and its cinema, or how its destruction would help the process of reconciliation. Additionally, questions have swirled about the lack of a published plan, budget or timeline for the museum’s renovations.

The outcry continued beyond the January 2, 2022 third-floor closures and grew deafening last week with objections to the $1 billion cost of redevelopment as health care and housing in British Columbia are both in crisis. Meanwhile, public confidence in the leadership of the RBCM plummeted.

So for Dubois – as the new face of the museum – to promote his private consulting business at a time like this is remarkable.

The speeches in question are not museal. It’s okay for CEOs to give speeches, but it’s not okay for them to identify themselves as consultants when they do. The relevance of Dubois’ priorities is open to discussion.

On March 28, 2022, Politico reported on this CORE (Collaborative Online Resources & Education) Alberta seminar: “ALICIA DUBOIS, founder of the Nish Synergies Advisory Group, in conversation with the Minister of Labor SEAMUS O’REGAN and LYLE DANIELS, community and aboriginal director for the building trades of Alberta. »

For a First Nations Major Projects Coalition (FNMPC) conference at the Westin Bayshore Hotel in Vancouver on April 25-26, 2022, Dubois is identified as “Co-Chair, CCCAB [sic](Canadian Council for Aboriginal Business).

On May 5, 2022, Dubois participated in an online panel discussion titled “Building an Inclusive Economy: Board Governance and the Importance of Economic Reconciliation” at the Institute of Directors’ National Directors’ Conference. companies (IAS). The CEO of RBCM is identified as “Co-Chair, Canadian Council for Aboriginal Business; Director, Green Impact Partners, Inc.; Founder and Director, Nish Synergies Advisory Group.

The ICD then published a summary of highlights from the event on May 12, 2022 in which many other participants are identified by their professional leadership positions. Dubois is not identified as CEO of RBCM, but only as “Co-Chair, Canadian Council for Aboriginal Business”.

On May 26, 2022, Dubois is scheduled to take part in a panel titled “Future Economic Outlook for 2022 and Beyond” at the Gray Eagle Resort & Casino Event Center in Calgary. This is the final presentation from the Forward Summit, billed as “a multi-day, Indigenous-led conference dedicated to advancing economic partnerships, uncovering opportunities for change, and supporting national relationships between Canada’s industry leaders and Indigenous communities.

The title of Dubois’ Forward Summit biography was recently updated to read “CEO of the Royal BC Museum” instead of “Nish Synergies Advisory Group, Founder.” Yet although the real 308 word biography provides information on virtually every major job she has held, including her roles with AIOC, CIBC and ENMAX, and includes a sentence devoted to the Nish Synergies Advisory Group, it says nothing about her responsibilities with RBCM.

Perhaps due to concern about outside speaking engagements, Dubois still hasn’t provided a biography for RBCM’s website more than three months after being announced as CEO.

Conversely, she has provided much the same biography in recent years for Natural Gas World Canadian Gas Dialogues, Wolverine Energy and Infrastructure Inc.the Indigenomics Institute, and other organizations. We therefore do not know why the space for his bio on the RBCM website still says “coming soon”.

RBCM has not publicly disclosed whether Dubois pre-approved his speaking engagements and appearances with the museum’s board. He also did not reveal whether the museum pays her to speak at in-person conferences.

Part 4 of the Museum Act of 2003, which made the Royal BC Museum a provincial Crown corporation, stipulates under “Conflict of Interest”: “Each director or senior officer of the Company who holds a position or owns property which, directly or indirectly, could create a duty or interest in conflict with his duty or interest as director or senior officer of the company, must disclose the fact, nature and extent of the conflict at a meeting of the directors of the company.

The way Dubois is positioning herself publicly raises red flags about the likelihood that she will lead the RBCM’s redevelopment to completion by 2030.

To the government Press release Accompanying the May 13 announcement, Dubois said, “How we share and learn from the truths and lived experiences of our past is fundamental to building our future and strengthening the fabric of our communities. By this standard, it is worth examining the past of the CEO.

According to Dubois LinkedIn profilein her last eight full-time jobs, she never held a position longer than three years and a month and generally stayed less than two years.

In recent interviews with Radio Canada and CFAX 1070 before the controversial May 13 press conference, Dubois did not reveal details about what the revamped museum will contain. She reiterated the BC Ministry of Tourism’s talking points, stressing that it will be diverse, inclusive and culturally safe, and shine a light on marginalized communities in BC.

Dubois told CBC that she moved her office downstairs and spent time greeting visitors in the RBCM lobby. These appearances were presumably not in the name of the Nish Synergies Advisory Group.

Lucas Aykroyd is an award-winning Victorian-born journalist whose work has appeared in National Geographic, The Washington Post and The New York Times. In 2009, he was nominated for a media award from the Aboriginal Tourism Association of BC (now Indigenous Tourism BC).

‘Appalling’ Victorian buildings in St Ann’s will be demolished to…

Want to spend less time? A prison consultant might be able to help.