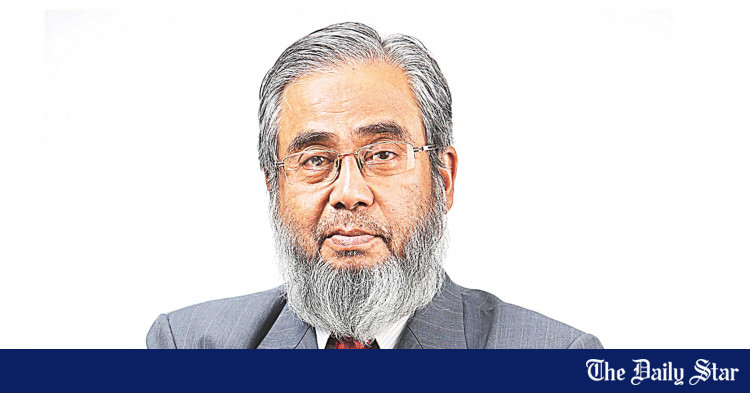 “Padma Bridge, a testimony to the confidence and dignity of Bangladesh”

The Padma Bridge has overcome the political, financial and construction challenges, according to Professor Dr M Shamim Z Bosunia, a structural and concrete design specialist who has been involved in the Padma Multipurpose Bridge project since its inception. As the government prepares to officially open the country’s largest bridge, Professor Bosunia, leader of the project’s expert panel, recalled the challenges encountered along the journey in an interview with Priyam Paul of the Daily Star.

The Daily Star (TDS): Why was the construction of the Padma Bridge an extremely difficult task? How were the challenges overcome?

For all the latest news, follow the Daily Star’s Google News channel.

Professor Bosunia: The laying of the first stone took place in 2001 while a feasibility study was carried out in 2004. Initially, the challenges were of two types. One was the technical challenge involving design and construction while the political dimension was another big issue. Three sites were shortlisted for the construction of the bridge and the current location was one of them, but the existing Dhaka-Mawa road played a key role in the selection process.

The World Bank was helping us at the time, but when the access roads and other services and buildings were being built, the organization suddenly learned that acts of corruption had been committed. Our Honorable Prime Minister vehemently denied these allegations and said the World Bank had to prove their claims. She then said that the government no longer wanted the money from the World Bank and that it was later proven that no corruption had taken place.

But nevertheless, the work had stopped because of the allegation. In 2013, the Honorable Prime Minister asked me if I would be able to start working on the bridge and I replied that if Professor Jamilur Reza Choudhury was with us, we would be able to do so.

So we started the task of appointing a contractor. The monitoring task was given to the army following a tender and in 2014 we awarded the works for the main bridge and the river formation. Still, people pointed to the cost of the bridge, which required around three lakh tons of steel and several billion cubic feet of concrete to build.

At current market prices, the materials would cost between Tk 10,000-12,000 crore while many other costs are involved. I don’t know how the initial estimate was made. The government also had to spend Tk 4,700 crore to acquire land while the value added tax on consultancy fees amounted to Tk 3,000 crore.

Thus, one could not build the bridge for Tk 10,000 crore and the costs increased later than the initial estimate. In addition, the bridge had to go through political, financial and construction challenges, which we overcame. Now we have come to the opening date.

TD: In terms of construction, is there any unique feature of the Padma Bridge compared to other mega bridges in the world?

Professor Bosunia: Padma is a fast flowing river, perhaps the second fastest flowing river after the Amazon and there is also too much sedimentation. When a pre-feasibility study was in progress at the Mawa-Janjira site, soil tests were carried out along the route and we found that there was weak soil in some places due to the presence of ‘clay.

We consider clay as weak soil but this clay was very hard, not like usual clay. Even then, according to engineering science, we have not built the piles where there is clay.

There are six piles, or steel foundations, under each pillar. We added another stake under the piers for good measure, although overseas engineers said using six or seven stakes wouldn’t make any difference. But we opposed their observation.

When they insisted on testing the pile load, we used a small pipe along the main pile to do the sealing. This method has not been widely used for bridges in other countries. Setting up the bearing system to help the bridge withstand earthquakes was another challenge. The bearing absorbs the horizontal movements of the structure. We have used it even though it has not been used much in other countries because it has only been applied in recent years.

Professor Bosunia: About 4,000 engineers worked on the Padma multi-purpose bridge. Among them, more than 500 were Bangladeshi. Asked about the source of our courage to build the bridge in the absence of foreign expertise and funds, we replied that there was nothing to fear. We followed the set criteria and in terms of education and knowledge, I don’t think there is a shortage in any area.

Many teachers from Bangladesh University of Engineering and Technology have been involved in many big projects in other countries, so we have included them as well. The most difficult challenge for the construction was the lack of equipment. Many of our local contractors brought the equipment needed to build roads, not full-scale bridges.

Now our contractors and engineers will be able to build bridges like this. Five companies can join hands and provide the necessary equipment. There is no logic why we can’t do this. There is sufficient transfer of technical know-how and technology. Building the Padma Bridge has given our confidence a huge boost.

TD: Why was only one railway line designed with the Padma Bridge project?

Professor Bosunia: Many have argued that with Bangladesh increasingly becoming a higher income country, two railway lines would have been nice. But we made a study keeping in mind the potential traffic scenario in the coming decades.

Three trains will be able to cross the railway bridge in one hour, which means that 72 trains will be able to pass each day. But there are not enough passengers to fill more than five to seven of these trains. Also, the main bridge would have had to be widened if we had added another lane, which would have further increased costs. Whenever a road or bridge is designed, we take into account the expected traffic. If there is no traffic, there is no point in expanding them.

TD: What measures are necessary to ensure the safety of the Padma Bridge in terms of maintenance, avoiding collisions with boats and climate change?

Professor Bosunia: When designing the bridge, a longevity of 60 to 70 years was taken into account. It is now said to last 100 years because a steel bridge is easy to maintain. The Hardinge Bridge is 107 years old while the Bhairab Bridge is nearly 100 years old and both were constructed from steel.

It is easy to protect steel bridges because the only problem is that they can rust. So care must be taken to prevent it. The consultant prepared guidelines on how to protect each structural element of the bridge for the Bangladesh Bridge Authority.

It’s like a daily routine. If they follow this, there should be no problem. Thus, maintenance guidelines must be strictly followed. The bridge is steel but concrete was used to support the load. Reinforced concrete and prestressed concrete were used in the bridge, which was designed taking into account the highest flood levels of the last 100 to 200 years. There is no shortage from a technical point of view. We have done our best with our knowledge to ensure quality.