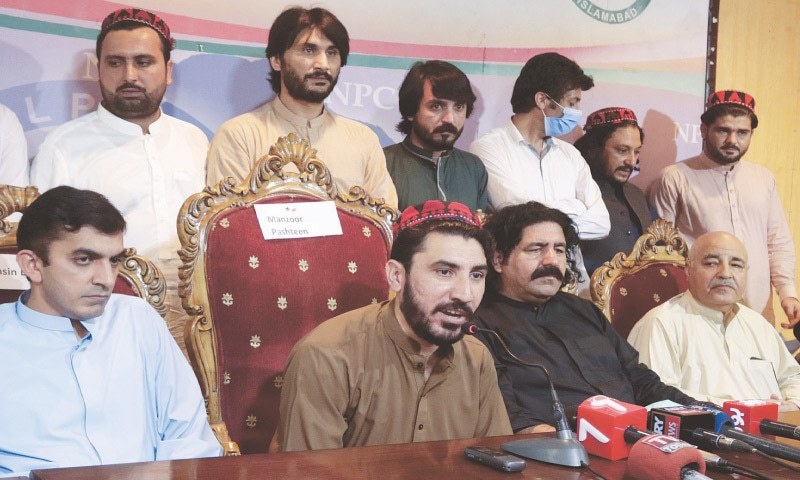 ISLAMABAD: The Pashtun Tahaffuz Movement (PTM) announced on Friday that the group had accepted the government’s offer of talks, but stressed that the authorities should first take confidence-building measures (CBM) to demonstrate their sincerity.

Speaking at a press conference here, PTM leader Manzoor Pashteen said the government must take action to close the confidence gap, adding that it is customary for the parties to take action of confidence before entering into talks.

During the press conference, he was surrounded by members of the National Assembly supported by the PTM, Mohsin Dawar and Ali Wazir.

Mr. Pashteen mentioned in particular the FIRs that had been recorded against PTM activists, many of whom he said had been put behind bars.

He said the PTM was prepared to describe in detail to the authorities in “black and white” all the problems facing the Pashtuns from Shaman to Swat.

He said freedom of speech and freedom of expression are constitutional rights that cannot be taken away. â€œIf there are excesses, there will be a protest,â€ he noted.

In response to a question, he said Defense Minister Pervez Khattak and National Assembly Speaker Asad Qaiser approached the PTM to officially offer a dialogue.

Speaking on this occasion, Deputy Dawar asserted that the State had not “protected the people and had not guaranteed them basic human rights”.

He said there were “restrictions even on freedom of association and assembly”. â€œFIRs accused of terrorism are recorded when we hold a public meeting. ”

He said a change in state policy was a sine qua non (precondition) for peace and development. The country’s economy was “collapsing,” he said and said peace was essential to get the economy back on track.

The parliamentarian asked the government to involve all stakeholders.

Mr Wazir was of the opinion that the Baluchis and Pashtuns had always been deceived in the name of the talks.

Defense Minister Pervez Khattak recently issued an invitation to PTM leaders to come to the negotiating table and discuss all contentious issues with the government.

â€œWe, Pakhtun, belong to the same province; therefore, we must work collectively for the development of Khyber Pakhtunkhwa, â€the minister said in a statement.

Mr. Khattak said the former Federally Administered Tribal Areas (Fata) had been merged with Khyber Pakhtunkhwa in order to integrate the tribal people into the national mainstream.

He said people belonging to tribal districts lagged behind others in terms of education, health and communication infrastructure, adding that it was high time for leaders to work for their upliftment rather than engage in any confrontation.

Build trust in your organization now