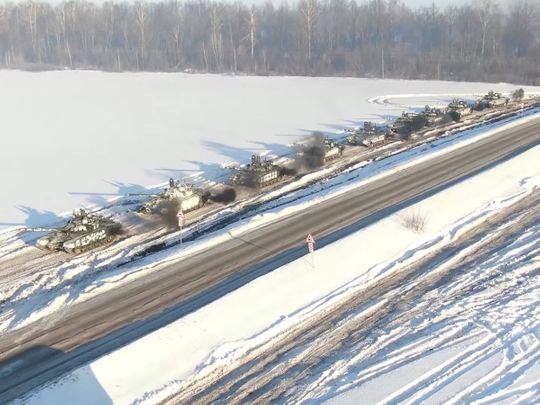 Moscow: Russian President Vladimir Putin said on Tuesday that Moscow was ready for talks with the United States and NATO on limits on missile deployments and military transparency, in a further sign of easing East-West tensions .

The statement came after Russia announced it was withdrawing some troops from exercises that raised fears of a possible invasion of Ukraine.

Speaking after talks with German Chancellor Olaf Scholz, Putin said the United States and NATO had rejected Moscow’s request to keep Ukraine and other former Soviet countries out of NATO, d to halt weapon deployments near Russian borders and roll back alliance forces from Eastern Europe.

Hours before the Russian Defense Ministry statement on troops, a US defense official said Russian units were moving closer to the Ukrainian border, not away from it. And Western officials continued to warn that the Russian military could attack at any time, with some floating Wednesday as a possible invasion day. The NATO chief said the alliance did not yet have proof of a Russian withdrawal.

Moscow held up Tuesday’s withdrawal announcement as proof that war fears were manufactured by a hostile US-led West: “February 15, 2022 will go down in history as the day that Western war propaganda has failed. Humiliated and destroyed without a single shot,” Russian Foreign Ministry spokeswoman Maria Zakharova tweeted.

Foreign Minister Sergey Lavrov said the troops were returning “as planned”. He said such drills always follow a schedule — no matter “who thinks what and who gets hysterical about it, who deploys real informational terrorism.”

Speaking in Brussels, NATO Secretary General Jens Stoltenberg said: “So far we have seen no de-escalation on the ground, no sign of a reduction in the Russian military presence on the borders of the EU. ‘Ukraine”.

European leaders have been scrambling to prevent another war on their continent, after several tense weeks that left Europeans feeling caught between Russia and the United States, and pushed up domestic energy prices further in because of Europe’s dependence on Russian gas.

“The path of diplomacy remains available if Russia chooses to engage constructively,” said Karine Jean-Pierre, senior deputy White House press secretary. “However, we are lucid about the prospects of this, given the steps Russia is taking on the ground in plain sight.”

British Foreign Secretary Liz Truss reiterated that the danger of an invasion still exists, telling Sky News it “could be imminent”. Norwegian Foreign Minister Anniken Huitfeldt issued a similar warning, and Estonia’s foreign intelligence agency said the Russian armed forces could launch an operation “from the second half of February”.