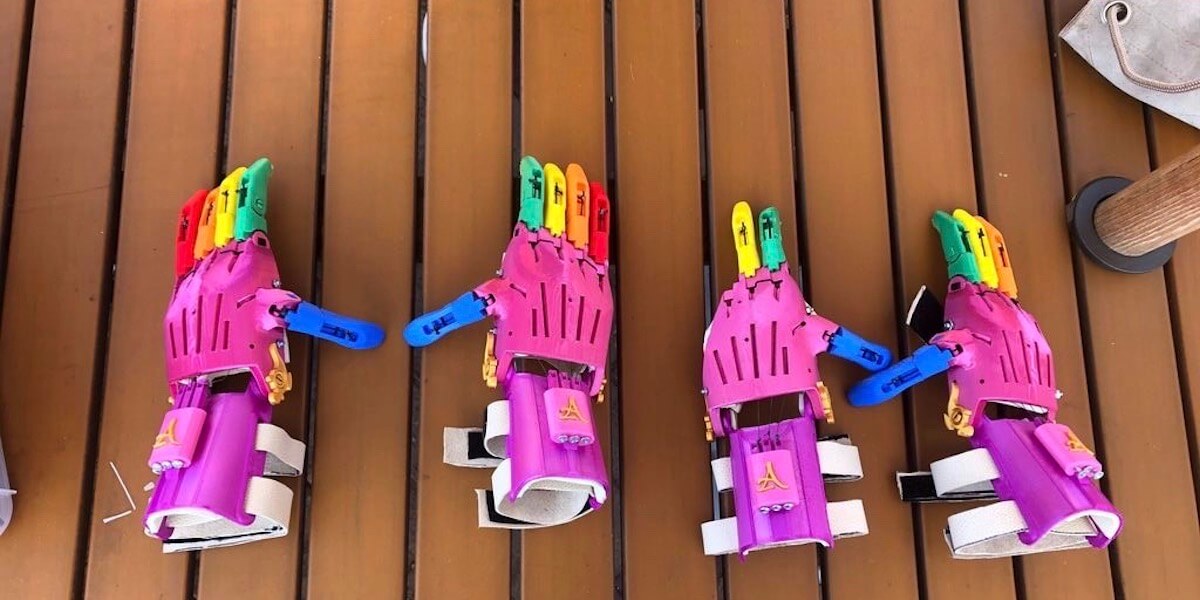 A fundamental part of how we interact with the world revolves around how we use our limbs. As children, we climb with our hands and legs, play an instrument with our fingers, throw balls and swing bats, all to learn flexibility, dexterity and of course, the joy of playing. Every year, however, thousands of children are born with limb differences and must learn to experience the world through a different tool: prostheses.

Prostheses are expensive and children can get rid of them quickly, while trying to gain the confidence to use them and to be different. But new solutions, like the 3D printed prostheses created by freehand USCa subdivision of the USC 3D4E student organization, may offer cheaper and more flexible options.

USC Viterbi School of Engineering sophomore and USC Freehand Fellow Brendan Kim said, “Prosthetics is a very rapidly evolving technology. One thing we need to make clear is that this is in no way a replacement hand; you won’t be able to lift heavy objects, but picking up smaller objects and throwing a ball or holding a pencil are things our hands can do.

USC Freehand works directly with children in the LA area, primarily through a partnership with the Children’s Hospital of Los Angeles (CHLA). The process is a collaboration between USC Freehand members and patients to ensure that prostheses fit well and are customized to patients’ color and design preferences. Each semester, the team of around ten students delivers two or three prostheses to patients, identified by Dr. Nina Lightdale-Miric, Director of the Pediatric Hand and Upper Extremity Surgery Program at ACCH and Founder of the “CATCH” Hand Differences Program. Each hand takes approximately one to one and a half months, from initial consultations, where measurements are taken and specific details of the patient’s condition are considered, to final impressions and adjustments.

Says Kim, “Freehand involves working with different people – doctors, parents, children. Dentures can be intimidating at first. It is especially important to be able to communicate complex ideas to young children and to create a welcoming environment for patients.

The type of USC Freehand prosthetic designs depends on the patient’s arm and hand training. “A child can have their wrist and palm formed, but the fingers haven’t fully developed from there. The prosthesis could work by flexing the wrist. Or maybe there’s no wrist present, but they have a fully formed elbow, so we connect the prosthesis to the biceps to get leverage to open and close the fingers by activating the elbow,” said Kim.

The virtual design process, which uses computer-aided design, is the first step. A team member will also scale some designs, like Spider-Man’s web, to make sure it fits the prosthesis. Once the drawings are finalized, the files are transferred to the Baum Family Creative Space, where parts are 3D printed. Sometimes these prints can fail, Kim said, so they try to print early in the week, leaving room to fix any issues.

After all the parts are printed, USC Freehand members come together to assemble the hand. The parts are refined, perhaps sanded to smooth the roughness. The final prosthesis is assembled and tested to ensure that all parts work properly. From there, the patient’s delivery is scheduled, at which time the patient tries his hand. Additional changes are made thereafter, as required.

Says Kim, “Usually the part that may need adjusting is a piece called the gauntlet (the part of the glove that covers the wrist). It is printed flat and we dip it in hot water to give it a more domed shape. What’s great is that patients can adjust this piece themselves, if needed. For example, last semester, a virtual patient’s prosthesis didn’t fit her perfectly, but her mother was able to adjust the size for her by removing the gauntlet, dipping it in boiling water, and re-molding it, said. said Kim. This process can be repeated ad infinitum.

The team focused on elementary-aged patients (three to ten years old, roughly). An important factor, Kim said, is assessing the size of the child’s limbs, which could be too small or too large for the prostheses delivered by USC Freehand. A typical hand uses PLA filament, which is very light. The hand can grab and hold light objects and can be easily re-printed if a part breaks in the future.

The team uses printers from USC 3D4E, which also funds their work, allowing them to give away all the prosthetics for free. They also use open source computer-aided design files (created by a community of volunteers called Enabling the Future) as blueprints to build their prostheses. Recently, they have started exploring new innovations such as The hand of the creator of Andrej Dukic. The Maker Hand is an ambitious project to create a 3D printed hand comparable to more advanced and expensive prosthetics.

Says Kim, “Andrej sent us his files and we hope to bring his innovation to the Los Angeles area. It’s certainly more advanced than any prosthesis we’ve ever done, so it would be a slow rollout, and initially more of a part of our research and development operations.

Building trust for the future

Many children struggle not only to use prostheses, but also to gain confidence by having a limb difference in the first place.

Says Kim: “The goal of our prostheses is not necessarily to be a replacement hand, but rather to boost the confidence of these children. Growing up with a limb difference can be difficult, especially psychologically, so we want our patients to be proud of the process.

Kim said that’s why they work with their patients to customize the prosthesis. “Choosing their own designs, making them more personal means they can proudly wear the prosthesis,” he said.

The prostheses come in different designs, including different colors and decals, like an Iron Man or Toy Story theme.

The prostheses allow children to build experience using prostheses, so they can upgrade to more advanced prostheses in the future, Kim said. “I like to think we’re setting them up for bigger and better things.”

Lebanon will respond to the proposed confidence-building measures…

Tips for Building Confidence and Success