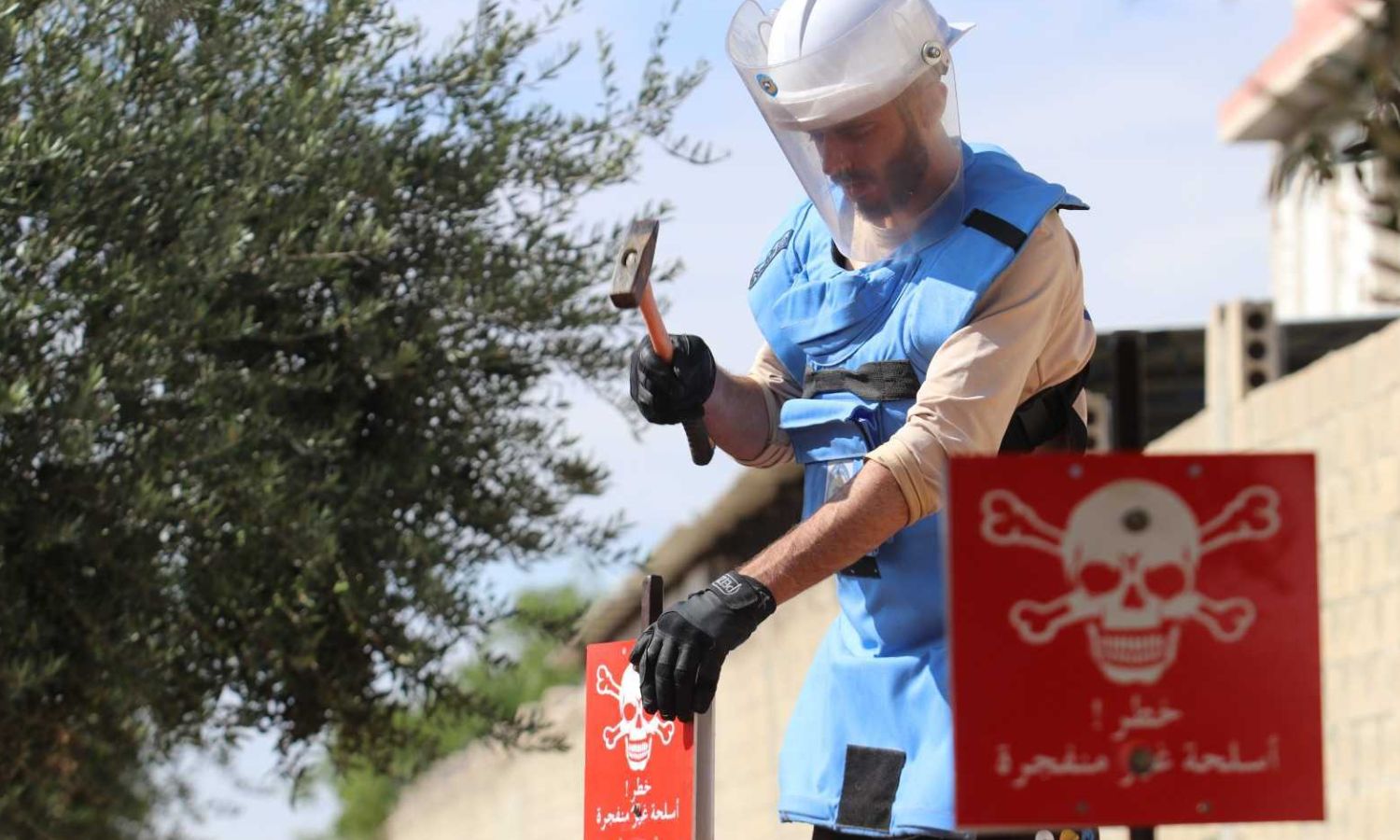 Despite the hazy vision regarding the early recovery phase in Syria, the Syrian Civil Defense emerged as the first to pursue recovery projects in northern Syria. But this effort is interspersed with fears that Russia and the Syrian regime will exploit this phase.

Discussions on early recovery plans come after the UN Security Council renewed Resolution No. 2585 on the delivery of aid through the Bab al-Hawa border crossing between Syria and Turkey to 12 months in two phases, each of six months.

The resolution included a clause welcoming all efforts and initiatives aimed at expanding humanitarian activities in Syria, including early recovery projects.

Some of the work of the Civil Defense Organization (White Helmets), which began as an emergency response organization, has shifted to projects aimed at improving living conditions, such as repairing infrastructure, mine clearance and other projects.

In an interview with Enab Baladi in his office in Istanbul, the organization’s director, Raed al-Saleh, explained the reality of this transformation, considering that the projects that fall within the scope of early recovery within the team’s programs are not new but part of of the daily work of the organization.

Talk to Enab Baladithe Syrian professor of economics added that the word “sustainable” was the key word that evaluated the inclusion of the projects within the framework of early recovery.

There is a lot of talk about early recovery projects in Syria. Between the fears that the regime and Russia will exploit these projects and the will of organizations and society to get there, the future vision of this process remains “fuzzy” even in the short term.

In al-Saleh’s opinion, it is still too early to talk about real projects that bring about significant changes within the framework of early recovery.

He added that the “recovery” was supposed to start after the end of the war, as the war and the Syrian regime’s systematic destruction of infrastructure continued in Syria.

Syrians really need a safe environment; hundreds of projects can be carried out to achieve a quick recovery, but they still risk being bombarded by the Syrian regime, al-Saleh said. A safe environment is a fundamental condition for large recovery projects, so that they do not lose their sustainability.

During an interview with Enab Baladieconomics researcher from the Omran Center for Strategic Studies, Mohammad al-Abdallah, believed that organizations’ projects in early recovery are linked to local determinants, including providing the enabling environment for the project to put implementation of early recovery interventions, the most important of which is the availability of a secure environment and appropriate local government capacity.

For his part, Prof. Karam Shaar said that the ongoing shelling in northwestern Syria is hampering early recovery plans but does not mean that this process should be postponed.

Shaar explained that areas held by the Syrian Interim Government (SIG) were somewhat safe from shelling. However, there has not been much development in the case of early recovery projects.

4 volunteers were killed as a result of these operations

The teams are responsible for:

1 factory for the production of Syrian civil protection clothing.

Steps that prepare for the future

The results of a study conducted by the Omran Center for Strategic Studies to assess the “early economic recovery” in northwestern Syria during the second half of 2021 showed the implementation of 766 projects and companies in the governorate of Idlib and the northern and eastern countryside of Aleppo by different organizations, including the Civil Protection in collaboration with the local councils.

Although the number of projects has increased, the significant impact of the “revival” on the region has not been demonstrated. But projects have emerged as milestones that pave the way for future projects.

Raed al-Saleh considered that the current civil protection projects prepare the infrastructure of the organization to be better able to embrace large projects in order to better serve the population in the future.

Al-Abdallah pointed out that many organizations have demonstrated their ability to successfully implement a range of interventions in various economic and infrastructure sectors as part of ongoing attempts to build their technical and human capacities to contribute with success in this process.

How has the organization strengthened its capacities?

Since 2019, the White Helmets organization has divided its work into programs, including the early recovery program, to increase the expertise and readiness of its employees, according to al-Saleh, who noted that this has helped the development and the management of these. projects.

The long time that the organization has devoted to carrying out projects in various fields, as well as its daily interaction with the Syrians, has enabled it to continuously develop all its departments, he added.

According to al-Saleh, the volunteerism and membership of many people from different professional and educational backgrounds have also contributed to developing the organization’s action plans and improving the readiness of its infrastructure.

The organization runs training courses throughout the year for all executives so that they are better equipped to handle different levels of projects.

Civil Defense efforts are divided into four main projects, Rescue and Firefighting, Relief and Healthcare, and Early Recovery and Justice.

Al-Saleh said that the organization does not favor one program over another, except in emergency situations where saving lives becomes a priority that pushes Civil Defense to strengthen its efforts in rescue programs, firefighting, rescue and health care.

Economics researcher Mohammad al-Abdallah said the White Helmets have proven themselves in recent years in the field of humanitarian action, particularly in the protection of civilians.

The organization’s interventions were part of the early recovery process and within the framework of interventions related to securing the population.

Despite the large number of organizations working on early recovery projects, most people in northwestern Syria still need humanitarian assistance to meet their basic needs due to obstacles and difficulties that hinder the achievement of their goals.

One of the biggest obstacles facing the Civil Defense is the lack of direct funding for early recovery projects in northwestern Syria, said the organization’s director, Raed al-Saleh.

Al-Saleh added that there are fears that the Syrian regime and its Russian ally could exploit early recovery funding for their own interests. The existence of safeguards against exploitation by any entity was a prerequisite for launching early recovery projects in the region, he said.

Al-Saleh explained that Russia was able to manipulate UN terminology to fund the regime’s projects and institutions, prompting Civil Defense to constantly warn UN organizations about the risk of the regime receiving funding from rapid recovery.

Prof. Karam Shaar said that the biggest obstacle to the success of organizations in implementing early recovery projects is the organizational barrier and the inability of organizations to demonstrate their effectiveness to donor countries and institutions.

In Shaar’s opinion, many donors are reluctant to provide support for two reasons. First, they believe that local organizations are not responsible and professional enough.

In the absence of donor confidence in all but a few organizations, the regions most in need of sustained aid were the least able to access it.

Researcher Mohammad al-Abdallah said that northwestern Syria was preparing to launch early recovery interventions, stressing that they would not be at an advanced level because they were essentially linked to the political component of the Syrian file and in a state of near-conflict. security stability.