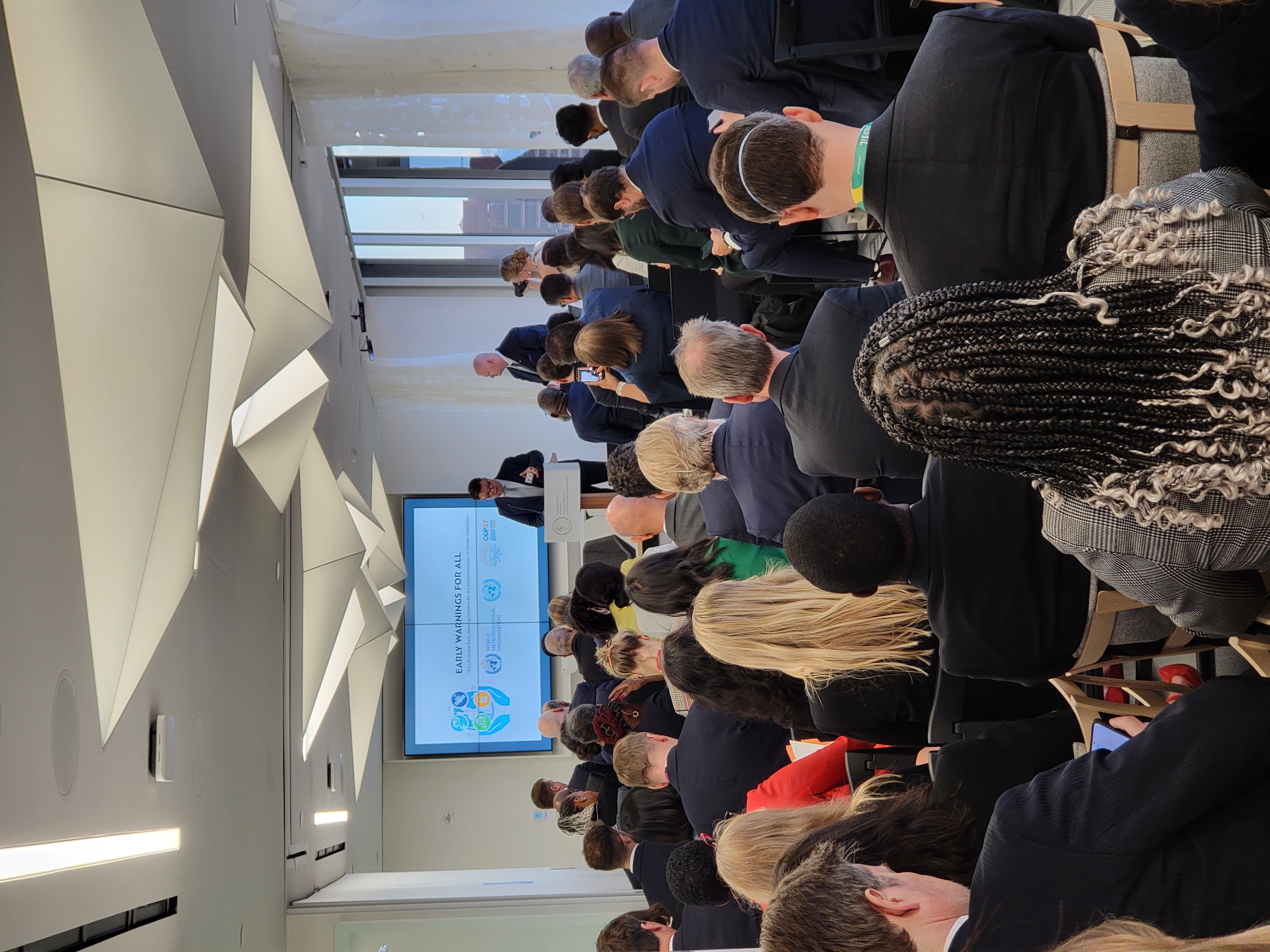 New York, 21 September 2022 (WMO) – Momentum is building to implement a plan to ensure that every person on Earth is protected by an early warning system over the next five years, seizing the one of the most effective “low hanging fruits” of climate change adaptation.

Ministers gathered in New York on September 21 on the sidelines of the 77th UN General Assembly High Level Week to pledge support for the UN’s Early Warnings for All initiative as an urgent measure climate adaptation.

Organized by the United Nations, the Egyptian government and the World Meteorological Organization (WMO), the ministerial event on early warnings for climate adaptation brought together countries from around the world, donors, international development agencies and the private sector. The event was organized by the Permanent Mission of Finland to the United Nations in New York.

“We must ensure that every person, community and nation has access to effective early warning systems over the next five years,” UN Secretary-General António Guterres said during the session. opening of the United Nations General Assembly on September 20. “It is high time to move beyond the endless discussions. Vulnerable countries need meaningful action,” he said.

Mr. Guterres asked WMO to present a roadmap to the UN climate change conference, COP27, in Egypt in November to carry out the rescue campaign. COP27 will shift the focus from promises and commitments to action on the ground.

“One in three people in the world, mostly in small island developing states and least developed countries, and six in ten people in Africa do not have access to effective early warning systems. This is why the Secretary-General has called for a global plan to ensure universal coverage of early warning systems over the next five years. We have the technological tools and the financial resources to achieve this. Protecting the lives and preserving the livelihoods of those on the front lines of the climate crisis must be a collective global responsibility,” said Under Secretary General for Climate Action Selwin Hart.

An estimated 3.3 to 3.6 billion people live in situations highly vulnerable to climate change. Over the past 50 years (1970-2019), a weather, climate or water-related disaster has taken the lives of 115 people per day and caused $202 million in losses per day. The number of recorded disasters has increased fivefold, partly due to human-induced climate change and more extreme weather.

A testament to the success of early warnings, the number of lives lost has nearly tripled over the past 50 years thanks to better weather forecasting and proactive, coordinated disaster management.

“The statistics speak for themselves,” said WMO Secretary-General Professor Petteri Taalas. “Early warning systems are a proven, effective and feasible climate adaptation measure that saves lives and money. We can and must reach the most vulnerable and ensure they translate into rapid action.

The Sixth Assessment Report on Impacts, Adaptation and Vulnerability of the Intergovernmental Panel on Climate Change recognized early warning systems as one of the key adaptation options.

The Global Commission on Adaptation’s 2019 flagship report ‘Adapt Now’ found that early warning systems deliver a more than tenfold return on investment – the greatest of all the adaptation measures included in the report .

The report also revealed that just 24 hours of warning of an upcoming storm or heatwave can reduce the resulting damage by 30% and that spending US$800 million on such systems in countries in development would avoid losses of 3 to 16 billion dollars per year.

“The least developed countries are among the most vulnerable to climate change. We must accelerate efforts to help least developed countries adapt to new and future climate risks. Ensuring universal coverage of early warning systems is an essential first step on this path,” said Eisehower Nduwa Mkaka, Malawi’s Minister of Natural Resources and Climate Change and Chair of the LDC Group.

“Small islands are on the front lines of the climate crisis. We need the international community to deliver on its commitments to accelerate action on climate change adaptation. Early warning systems save lives and prevent economic loss. All small islands urgently need to be protected by early warning systems,” said H.E. Molwyn Joseph, Minister of Health, Welfare and Environment of Antigua and Barbuda and President of the Alliance for Small Island States.

A range of innovative new and pre-existing financing solutions are needed to implement the plan to protect every person on Earth. These include a scale-up of the Climate Risk Early Warning Systems (CREWS) initiative, the Systematic Observations Funding Facility (SOFF) and Accelerated Climate Fund Investment Programs , such as the Green Climate Fund (GCF) and the Adaptation Fund.

CREWS already supports 75 countries and has received nearly $80 million in contributions since its launch in 2015, led by France.

“We need to go further and faster and we now aim to raise an additional $155 million by 2027,” said Chrysoula Zacharopoulou, Minister of State for Development, Francophonie and International Partnerships of France. She announced that France would double its annual contribution to CREWS, from 2023, to 8 million euros per year.

German Parliamentary State Secretary to the Federal Minister for Economic Cooperation and Development, Bärbel Kofler, also expressed her commitment to CREWS and SOFF, one of the other core elements of the Early Warnings for All is SOFF initiative.

“Recognizing the urgent need for action, the Nordic Development Fund has made a substantial contribution to the Systematic Observation Funding Mechanism (SOFF) – a fundamental part of the United Nations Early Warning Systems Initiative. SOFF can fill gaps in basic weather and climate observations in the most vulnerable countries, leading to improved weather forecasts, early warning systems and climate information services. This can only be achieved through a collective international effort, and we look forward to seeing more countries join the United Nations SOFF Multi-Partner Trust Fund,” said Karin Isaksson, Managing Director of the Nordic Development Fund.

What is an early warning system?

A multi-hazard early warning system is an integrated system that lets people know that dangerous weather or climate events (floods, storms, heat waves) are on the way and informs people on how to act to minimize the impacts . End-to-end MHEWS includes risk awareness, observation, communication and response.

The practicality, implementation and universal political appeal of early warning systems make them an appropriate focus area for COP27. 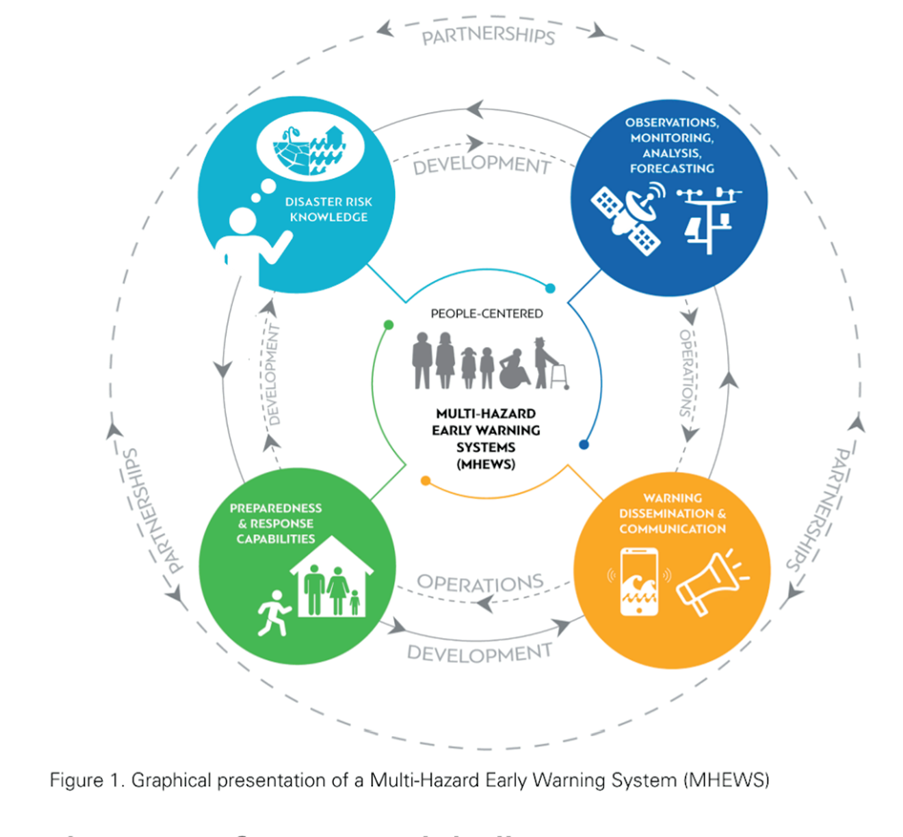 HE President El-Sisi of Egypt recently stressed that turning pledges and commitments into implementation on the ground is a top priority of Egypt’s COP27 Presidency. President El-Sissi also stressed the need to improve the size, quality and mechanisms of climate finance available to developing countries, especially to help them adapt to the negative effects of climate change.

In this regard, the COP26 and COP27 Presidencies called on developed countries to follow through on their commitments made in Glasgow to at least double their climate finance for adaptation in developing countries by 2025, in the goal of achieving a balance between funding for adaptation and funding for mitigation.

COP26 President Alok Sharma highlighted the UK’s support for the Early Warning for All initiative. He said he was concerned that there was some “backsliding” on the climate commitments made in Glasgow. “It’s not acceptable,” he said.

WMO and its partners ensure that early warnings translate into rapid action and reach the last mile.

/Public release. This material from the original organization/authors may be ad hoc in nature, edited for clarity, style and length. The views and opinions expressed are those of the author or authors. See in full here.