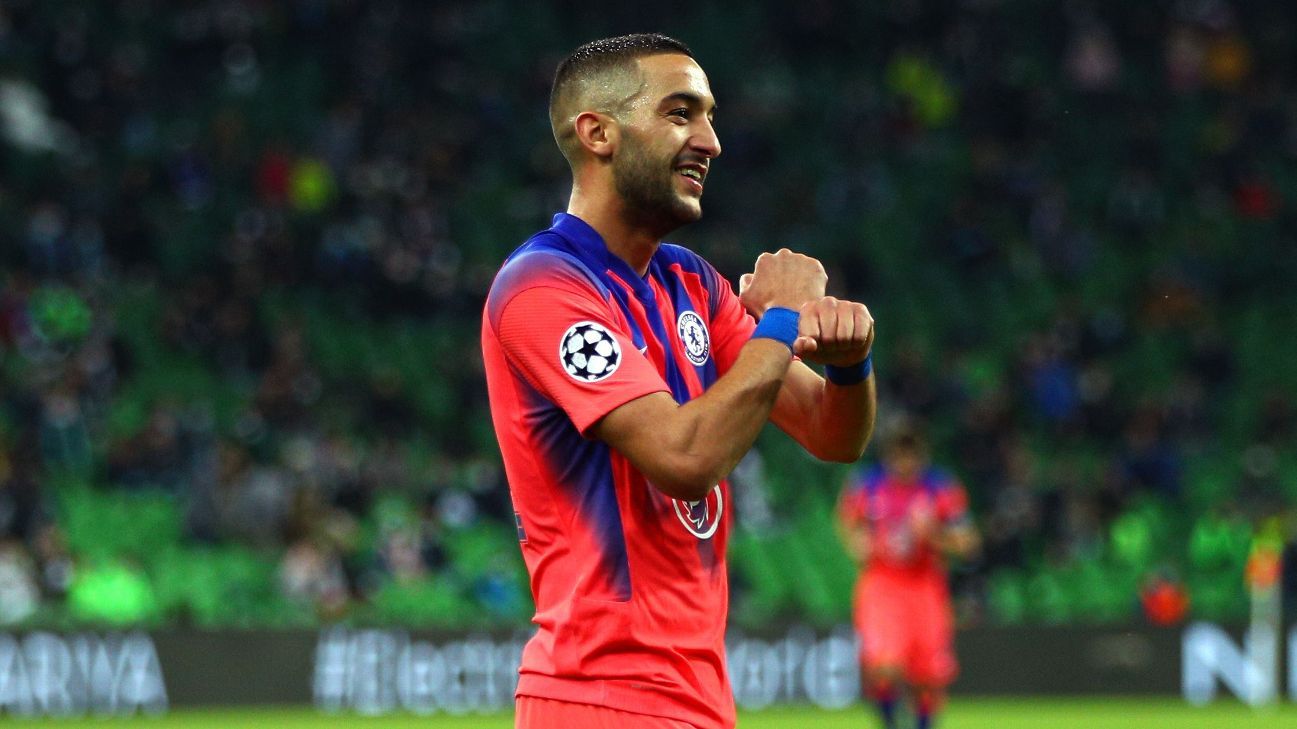 Chelsea made light work of Krasnodar in front of a crowd of 10,000 in southwest Russia in their Champions League Group E fixture on Wednesday night, winning 4-0.

Up 1-0 courtesy a fortuitous Callum Hudson-Odoi goal, Frank Lampard’s triple change with 20 minutes remaining appeared to kill any chance the well-supported home side had of poaching a rare late point. Timo Werner scored from the penalty spot before Hakim Ziyech notched a goal on his full debut while Christian Pulisic’s late effort secured the points.

Passing certainly wasn’t an issue for Chelsea on this night. They popped the ball around excellently and denied Krasnador possession throughout large parts of the game. Commitment was no issue either with Kurt Zouma and Edouard Mendy putting their bodies on the line on the rare occasion that Krasnodar threatened. Three late goals speak for themselves as Chelsea’s clinical edge provided a much-needed confidence boost after a three-game winless streak.

Chelsea’s defensive movement in the first half especially prevented Lampard’s side from playing their best football. Zouma and central defensive partner Antonio Rudiger were passive in their play and struggled to deal with the hosts’ first line of defense. Jorginho will be the key talking point, though, after he missed a second penalty of the season before being substituted.

Manager rating out of 10

9 – Two-thousand miles away from home, sandwiched between Premier League games against Manchester United and Burnley, Wednesday’s game had the potential to be a banana skin for Lampard & Co., but the five changes he made from the weekend’s game at Old Trafford evidently worked . A triple change late on helped to ease any anxiety of dropping points in the game’s closing stages.

GK Edouard Mendy, 7 – Parried the ball when he had to, but in large parts it was a quiet game for Mendy as the hosts rarely threatened Blues’ goal. When they did it was often from an ambitious strike that was destined for the stands.

DF Cesar Azpilicueta, 8 – Azpilicueta’s excellent energy down the flanks certainly opened up options for Chelsea’s midfielders when play was at times staggered in the first half. Brilliant ball control and his crosses were strong and accurate, which tested a vulnerable keeper.

DF Kurt Zouma, 7 – A lackluster performance to start off, Zouma rarely appeared to be playing his best game and that consequently hurt Chelsea’s attempts to move play forward quickly. Saying that, he displayed outstanding commitment at times.

DF Antonio Rudiger, 7 – With five international appearances to his name this season prior to Wednesday, but this was his first Chelsea outing of the campaign. It showed early on as his partnership with Zouma appeared rusty. Saying that, he managed to keep a clean sheet.

DF Ben Chilwell, 6 – Not Chilwell’s best game, he looked tired at times and perhaps could have benefitted from some rest in the second half. Combination play with Hudson-Odoi is an area for concern as the pair never appeared to bounce off each other’s play when moving forward.

MF Jorginho, 5 – Was almost made to pay for a cheap giveaway of possession early on, which granted Krasnodar their first sight on goal. A missed penalty moments later did little to help his cause. A night to move on from.

MF Mateo Kovacic, 6 – Quiet first half, but pounced on a ball that bounced well for him on the edge of the area to start the second, and was unlucky to watch that effort fizz just wide of the post. Otherwise a substandard, no-thrills performance.

MF Hakim Ziyech, 8 – Made his full Chelsea debut and fans got a flavor of what he can offer in midfield. Ziyech’s play and movement was crucial at times and he possessed great vision too. Rewarded with an intelligent late goal.

MF Kai Havertz, 7 – Not the busiest of games for Havertz, but his first touch was a true weapon in the visitors’ locker. Excellent close control allowed Havertz to quickly maneuver the ball around dangerous areas, and he consequently picked up a deserved assist.

MF Callum Hudson-Odoi, 7 – Boasted little possession in the opening half but did benefit from a woeful piece of goalkeeping to score his first Champions League goal when scuffing a shot on the edge of the penalty area.

FW Timo Werner, 8 – Struck a positive penalty to put the game to bed with little more than 15 minutes remaining – a total contrast to Jorginho’s earlier spot kick. Had pockets of strong positional play where he first touch and pace stood out.

MF N’Golo Kante, N / R – Replaced Jorginho at the base of midfield, and admirably patrolled large swathes of the pitch without another recognized deep-lying midfielder on the pitch for Chelsea.


MF Mason Mount, N / R – His trademark energetic pressing provided an impetus to what had previously been a somewhat stale midfield after coming on for Kovacic.

MF Christian Pulisic, N / R – Took the place of Hudson-Odoi and added drive that had been missing from wide areas, and was rewarded for his efforts with a goal and a penalty won.

DF Emerson Palmieri, N / R – Relieved Chilwell on the left of the back four, and was routinely involved in Chelsea’s build-up play in the final 10 minutes.